The Measure of the Man

Posted on February 27, 2013 by dekalbschoolwatch 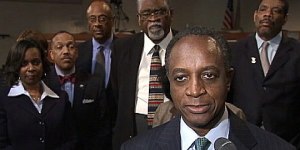 Taken from the Official Code of Georgia Annotated (O.C.G.A.),

listed below are a “baker’s dozen” — requirements that directly
apply to DCSS Superintendent
Michael Thurmond.
How many boxes does he tick off as superintendent?    Ignore, if you can, Thurmond’s statement, “I’m a great believer in the power of public education,” — this from a man who sent his own child to private school.   Public education is okay for everyone else.

shall constitute the medium of communication between the State School Superintendent and subordinate local school officers.

shall be the executive officer of the local board of education;

shall be the agent of the local board in procuring such school equipment and materials as it may order;

shall ensure that the prescribed textbooks are used by students;

shall verify all accounts before an application is made to the local board for an order for payment; and

shall keep a record of all official acts, which, together with all the books, papers, and property appertaining to the office, shall be turned over to the successor.

It shall be the local school superintendent’s duty to:

to visit every school within the local school system to become familiar with the studies taught in the schools,

observe what advancement is being made by the students,

counsel with the faculty, and

otherwise aid and assist in the advancement of public education.

We believe this last one is especially applicable.  If he continues as superintendent, Thurmond must be removed from the poisonous atmosphere in The Palace.  Putting Thurmond’s office in the DeKalb County Courthouse will enable him to begin cutting the bloat, deadwood and friends-and-family hangers-on in The Palace.  Absolutely necessary positions can be moved back to Buildings A & B on North Decatur Road.  There should be plenty of space in Buildings A & B if only absolutely necessary positions are retained.  Meanwhile, The Palace can be sold or leased with those recovered monies returned to SPLOST funds, where they belong.

Hosting a dialogue among parents, educators and community members focused on improving our schools and providing a quality, equitable education for each of our nearly 100,000 students. ~ "ipsa scientia potestas est" ~ "Knowledge itself is power"
View all posts by dekalbschoolwatch →
This entry was posted in Budget Cuts, DeKalb County [GA] Board of Education, Michael Thurmond, SACS/Accreditation, Uncategorized and tagged DeKalb County School Superintendent, DeKalb County Schools, Michael Thurmond. Bookmark the permalink.

29 Responses to The Measure of the Man