Did you miss the DCPC meeting? No worries – the Fact Checker has a report!

Posted on May 2, 2013 by dekalbschoolwatch 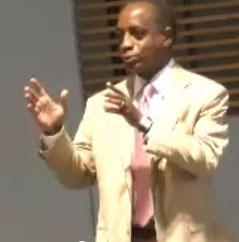 Michael Thurmond was the featured speaker at yesterday’s Dunwoody Chamblee Parent’s Council meeting and the DeKalb County Fact Checker was there to record the event!

Go to FactChecker.StanJester.com to watch the video and read the transcript. There were many issues discussed and the public in attendance asked some tough questions.  We learned several key points:

Many in attendance took issue with Thurmond’s statement that he cannot support an effort to seek dual accreditation from another agency besides SACS (in most cases Georgia Accrediting Agency) because it places too much emphasis on certain schools over others, causing division.

My focus is on gaining full accreditation for the entire district. It just is. That’s what I was hired to do. And that is my focus. And what I’ve said to Terry and I’ve said to others here, is that I will not support anything that undermines the value of that effort. Because, at the end of the day, we have 21 … we have schools all across the district that must be accredited. I understand, I get your concern. But, my concern is for 99,000 children.

I think the other issue, dual accreditation. It seems that you’ve associated dual means equal. But in this case it doesn’t. You’re not seeking equal accreditation. Because these two accrediting agencies are not equal. Dual suggests equal, but these two agencies are not equal. No one argued that. One accreditation primarily the state level and one at a national. And I think that the discussion needs to be clarified so that people will understand what one means opposed to the other. Now, I’m not opposed to having two. But one you’re required by law in the state of Georgia. You must be accredited. The other is an option. And we make those decisions all the time… Some things are necessities and some things are optional. In my world, you address the necessities first. And then you reach for the things that might be optional. You just prioritize in your life. You do it every day, with your children, in your home, in your lives. You have to have some things that are not optional. And, having a fully accredited school district is not an option. One of the the things I said to Terry, and I’ll share with you all. In fact, what I need is your help to win full accreditation that everyone must have including you. This high school. So, as we seek dual, while we’re working for the accreditation for this high school too, we need your help. That’s why we have the parent council meeting from district wide.

On the subject of parental involvement, when asked exactly how he planned to improve involvement around the county, Thurmond gave the following response:

First, it was incumbent upon me to reach out, as I reach out to you and reach out to parents across the district. To reach out to parents in Clarkston who may not speak English on a primary level, to encourage them to participate in the education of their children. And to let them know, that they will have a partner … the lady that spoke first said something that I’ve heard on more than one occasion. That in some schools, some areas, parents feel as if they are not welcome. And whether it’s real or perception, that when they reach at this level, it does not matter. If it’s real, then we can change it. If it’s a perception, we need to correct it. And, next we have to … we assume that all parents know why it’s important to come to a parent teacher conference, why it’s important to participate with the council. That’s an assumption that doesn’t necessarily bear reality. We must build capacity. See, there are parents not like you and I who don’t have the resources that you and I have been blessed with. Who really can’t take off Wednesday morning, and sit there [at a PTA meeting]. Just can’t. Or could and don’t know that they should. We can build that capacity, cause the one thing that compelled me, and I was talking to a parent, I said something think about. We know that because you live in a low income community doesn’t mean you don’t love your child. Does it matter what your income is when it comes to loving your child or your children. Somebody said, we love our children. Parents in other parts of the county love their children too. We can build capacity to help them be more supportive in those efforts. And we can have district personnel who appreciates the efforts, and you know it may not be, I could make the type of investments that you make, there are people that buy houses. There are folks have loans and resources to get contractors to come in and remodel and put it on the market and resell it, at least before the great recession. And there are others who use sweat equity and engage in the same process. You may not have the same bank account, but you can at least balance that through sweat equity in your child’s education. I know it works. I’ve seen it work. We have high performing schools all over. Some of them Title I, they perform well and one thing has become, very active, engaged parents. You’ll see more of it in the budget.

That’s a very nice sermon. No one would disagree. He is obviously good at using his undergraduate degree in religion and philosophy. But as with most of his answers, they are wordy, disconnected, streams of consciousness that have few details, few hard facts and little evidence that he has a full, strong grasp on the enormity of the project at hand. He’s a very nice person with a kind heart and good intentions, but we desperately need a qualified professional who can set a clear path and lead us to a place where education is Job 1 and the $1.2 Billion dollar budget follows, just as form follows function.

Hosting a dialogue among parents, educators and community members focused on improving our schools and providing a quality, equitable education for each of our nearly 100,000 students. ~ "ipsa scientia potestas est" ~ "Knowledge itself is power"
View all posts by dekalbschoolwatch →
This entry was posted in Michael Thurmond, SACS/Accreditation, Uncategorized and tagged DCPC, DeKalb County Schools, Dunwoody Chamblee Parents Council, Michael Thurmond. Bookmark the permalink.

26 Responses to Did you miss the DCPC meeting? No worries – the Fact Checker has a report!