Something does not compute

Posted on June 26, 2014 by dekalbschoolwatch

Again and again, we are told that things are going so much better with Thurmond and the (mostly) Governor-appointed school board at the helm – and some things are better.  Our credit rating has greatly improved. We have been taken off accreditation probation (but are still at warning status), our budget has been balanced as the new CFO found over $20 million in federal and local revenue that somehow been unaccounted for, and we have received a $3 million grant to hire more principal supervisors (will they get new cars too?). Our expected tax increase for the coming year will serve as a windfall to the schools, as property values increased up to 13% in some areas of the county and the school board decided not to roll back the tax rate, but to leave it at the increased rate set by the former board to compensate for the drop in property values during the Great Recession.

That seems mostly good on the surface and sounds good in a press release, but how have things been going for students and their teachers?  For starters, teachers continue to remain in a lawsuit with the Board over the 2009 decision to cut out contributions to their retirement annuities in lieu of Social Security (matching the former board portion of the SS contribution). This board-promised tax-sheltered annuity was originally implemented in order to convince teachers to forgo Social Security back in the early 80s. The school board reneged suddenly in 2009 in order to balance the budget more easily in big chunks (Ramona Tyson’s exact words were ‘We have to go after the big nuts’). In addition, teachers have not had a raise or step increase in over six years, although their responsibilities have increased exponentially in terms of class size, testing expectations, ‘data’ collection and paperwork. Add to this, the board agreed to pay over $3 million to hire foreign supply teachers through a local company at a cost per teacher totaling $66,500 (including the agency’s $11,500 finders fee per teacher).

In contrast, in spite of the accrediting agency AdvancED (SACS) calling our multi-million dollar contracts with two outside law firms excessive, superintendent Thurmond has secured the services of yet a third law firm, McKenna, Long & Aldridge, to the tune of $50,000 per month (nearly the annual cost of one teacher) to consult on ‘board governance’.  The money is there for teachers–the administration and the board simply so often choose to spend it elsewhere–places never mentioned when budgets are passed. Happily, after years of cuts, Governor Deal recently announced that the state will be increasing the education budget in order for local systems to afford to decrease class sizes, restore furlough days and grant a raise to teacher salaries. Let’s hope DeKalb uses this increase of state funds as they are intended.

Students and teachers in our traditional schools continue to suffer from over-crowding and violence as the school board once again asked the state for a waiver on class size. ( Click here to review class size limits for students on regular schools.) In addition, many of our school buildings are still in great need of repair and renovations. Now, if you are lucky enough to be in a magnet or specialty school of some kind like the recent schools held up as DeKalb success stories such as DeKalb School of the Arts (average class size is 15-18) or Kittredge or Wadsworth magnet schools (low class sizes due to the numbers of ‘gifted’ students attending – plus a full staff and building of their own.) The same holds true for the DeKalb Early College program, also highlighted for their success. This is a joint venture with Georgia Perimeter College, and many classes are held at the college, as well as in the DeKalb County Schools space at Mountain Industrial, with a full staff allocated to these students.  (There is a duplicate program at GPC called Gateway to College as well.) These are the schools you read about in the news as being some of DeKalb’s finest. Why, yes they are fine schools, however, are they partially successful because they usurp funds, attention and staff? What would happen if you employed the same luxuries to the other 130+ DeKalb schools? Would traditional students fare better if they could have reduced class sizes and much more individualized attention? Would their teachers be more energetic and focused with so few students in total comparatively? We certainly know the answer to that.

Contrast recent news reports about these ‘high performing’ specialty schools against the recent annual test score results of the system overall as FY2014 CRCT district results were released by the Georgia DOE yesterday. When averaging the CRCT scores, DeKalb Schools “anchors” metro Atlanta in every grade. 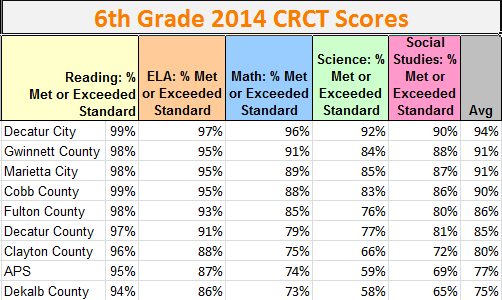 Now, take a look at what we pay for these poor outcomes in DeKalb – we are the highest taxed county in the metro area and the second highest in the state.

Forgive us if we don’t join the lemmings and proclaim DeKalb ‘healed’! We’ll continue to wear the safety parachute. Real Data shows that we still have a very long way to go in DeKalb.

+++
Many thanks to Stan Jester and his “Fact Checker” blog for providing so much data and great charts! Check out Stan’s blog here >> Stan Jester’s Fact Checker

50 Responses to Something does not compute