Posted on July 16, 2014 by dekalbschoolwatch

These are the candidates in the runoffs for school board seats up for election in a runoff election to be held JULY 22, 2014 >>

To recap: Below are the results of the May 20 non-partisan school board election, at which all seven school board seats were up for election (with the two super district seats being eliminated). Four seats were secured and three will continue on in the runoffs.

To see the election results in detail, check here at Ballotopedia.com 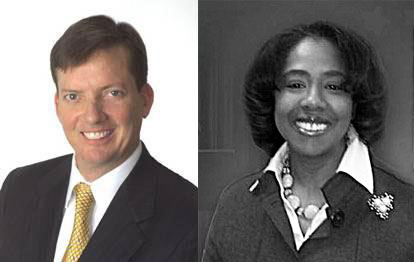 Two incumbents will compete on July 22 for the District 4 DeKalb school board seat: Jim McMahan, who was originally elected by the people of District 4 and Karen Carter, who lives in District 4 and was appointed by Gov. Deal to the Overlay District 9 seat (now eliminated by the GA Legislature).

I have a background in Financial Services for the last 29 years. Investment Advisor with Dean Witter Reynolds & Morgan Stanley and since having children 14 years ago I have worked as a Residential Loan Originator currently with Amstar Mortgage Network. I spend hours reviewing the district financials every month and propose ways to increase transparency and create efficiencies.

I am a taxpayer advocate and parent who understands the challenges our teachers and students face each day in our schools. I am not a lifelong administrator as one of my challengers who voted against the Druid Hills Charter Cluster. I support local control and look forward to establishing a “Charter System” within DCSD.

To read the entire interview with Jim, click here.

I am an educator who has served in senior administrative roles in higher education as well as on the faculty. In these positions I have gained a greater understanding of coalition building, demonstrating compassion for others while working on challenging issues and engaging diverse stakeholders. I am also a licensed attorney with more than twenty years of experience working with non-profit boards as a trainer, board chair and member, I am a consensus builder and systems thinker who can see the big and little pieces of an issue and help others understand how they contribute to resolving the issue and moving the mission forward. I believe that these skills as well as my commitment to helping others achieve their best have allowed me to work with all board members to move this school district forward in achieving academic success and respect.

I was appointed by Governor Deal to serve the district last year and I believe I was selected because of the combination of my professional skills, history as a servant leader, and my diverse K-12 experiences. While the appointment allowed me to work with others to begin creating positive change for the district overall, the work is not complete. The short term successes we have achieved continue to fuel my passion for ensuring that all children receive a high quality education. I believe that what makes me unique in this group of candidates’ is that I am a non-parent whose life work has been the advancement of education. As such I represent the voice and vision of the reasonable citizen without children at home who still wants to make a difference. Like others, I support education through taxes, personal engagement and service.

To read the entire interview with Karen, click here.

To learn more about Jim McMahan, visit his website: VoteJimmyMac.com

To learn more about Karen Carter, visit her website: KarenForDeKalb.com

DSW Note: Many thanks to WABE 90.1 Atlanta’s National Public Radio station for taking the time to post interviews with the candidates. You may also like to reread our post about the candidates originally written for the May election, DeKalb County School Board Candidates up for election on May 20, 2014: A Review.