Posted on October 24, 2014 by dekalbschoolwatch 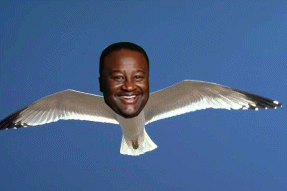 So he’s free at last! Crawford Lewis will not be going to prison and in fact, as far as we know, he is not only free to move about the cabin, but taxpayers will continue to pay his very large pension in perpetuity.  What a great gig for Crawford ! He could have ended up with years in prison like his cohorts but in testifying against them (which he really didn’t contribute all that much except to say that he ‘felt’ like Pat Pope was going to blackmail him), he put them away for decades, and will spend his life free as a bird.

+++
Lewis was charged along with former DeKalb schools chief operating officer, Pat Reid, and her ex-husband, architect Tony Pope, on racketeering and theft counts, in connection with school construction projects.

Prosecutors let Lewis plead to a misdemeanor count of hindering and obstructing a law enforcement officer after he agreed to testify against Reid and Pope. After his testimony, both prosecutors and Lewis’ lawyer recommended a sentence of 12 months on probation and told Becker they believed Lewis had told the truth on the witness stand.

Becker instead ordered Lewis behind bars last year, saying he allowed the crimes to occur in his school district and then hindered an investigation. When asked to reconsider, she questioned the “credibility” and “believability” of Lewis’ testimony, “thereby implying that Lewis may have testified untruthfully,” the appeals court opinion said.

The appeals court on Thursday issued a harshly-worded opinon that said Lewis did not get fair treatment in Becker’s court. He is entitled to specific details about how he allegedly lied, the ruling said. The ruling also suggested that Lewis seek Becker’s recusal, so another judge can decide that issue.

Hosting a dialogue among parents, educators and community members focused on improving our schools and providing a quality, equitable education for each of our nearly 100,000 students. ~ "ipsa scientia potestas est" ~ "Knowledge itself is power"
View all posts by dekalbschoolwatch →
This entry was posted in Crawford Lewis, Criminal / RICO Trials, DeKalb County, Fraud & Corruption, Georgia and tagged Corruption, Crawford Lewis, Criminal, Criminal / RICO Trials. Bookmark the permalink.

34 Responses to Crawford Lewis’ sentence is overturned on appeal